An evening at the beach is a fantasy and joyous thing to do for many.
Let me share the quote of McLachlan and Erasmus (1983)

” What sight is more beautiful than a high energy beach facing lines of rolling white breakers? What battle ground is more ferocious than where waves and sand meet? What environment could be more exciting to study than this sandy interface below land and sea? And yet how much do we know about sandy beaches?”

Beaches in Kerala, particularly in our region are beautiful with rough seas and wild waves. Along with rain, dark cloud, wind, lighting and thunder, the beauty is beyond one can explain.

Today’s presentation is from a set of photos taken during one of my holidays in July 2007. My father was with us and was writing out Sree Ramajayam in Malayalam and enjoying the way, the waves washed them out, each time he wrote it!. (Unfortunately, 10 years later, it was at the same place we immersed his ashes as part of the rituals associated as per our custom).

For those who wish to know, the Story of writing Sree Ramajayam take us to the epic Ramayana and if interested, a weekend challenge for you to attempt.

Faced with the dilemma of how to cross the ocean to Lanka, where his kidnapped wife Sita is held captive by the demon king Ravana, Rama (an Avatar of Vishnu) performs a penance (tapasya) to Varuna, the Lord of Oceans, fasting and meditating in perfect dhyana for three days and three nights. Varuna does not respond, and Rama arises on the fourth morning, enraged by the God’s arrogance. With his bow and arrow, he angrily begins attacking the oceans with celestial weapons – burning up the waters and killing its life and creatures. The Vanaras (Monkeys) are dazzled and fearful at witnessing the enraged Rama demolish the oceans, and his brother, Lakshmana, prays to calm Rama’s mind. Just as Rama invokes the brahmastra, considered the most powerful weapon capable of destroying all creation, Varuna arises out of the oceans. He bows to Rama, explaining that he himself was at a loss to answer Rama’s question. Begging him not to destroy the oceans with the missile, he suggests that Rama re-direct the weapon at a demonic race that lives in the heart of the ocean. Rama’s arrows destroys the demons, and establishes a purer, liberated environment there. Varuna promises that he would keep the oceans still for all of Rama’s army to pass, and Nala constructs a bridge (Rama’s Bridge) across to Lanka. Rama justifies his angry assault on the oceans as he followed the correct process of petitioning and worshipping Varuna, but obtaining the result by force for the greater good.

It is thus believed that when someone writes Sree Ramajayam on the sand at the seashore, the sea (i.e. Varuna) get intimidated and tries to clean it as soon as possible.

Try it wherever you are – write Sree Rama Jayam in any language, a little further than where you expect the waves normally come, and watch the fun of it being cleansed by the waves.

See the video of it: https://clicksandwrites.wordpress.com/2008/03/07/story-of-fight-between-sree-rama-and-varuna/

Established by the late Sheikh Zayed bin Sultan Al Nahyan, Al Wathba Wetland Reserve is the first area in the Emirate designated for protection by law and was declared a Ramsar site in 2013. Once a coastal salt flat (sabkha), it has now flourished into natural and man-made lakes that enable many of Abu Dhabi’s species to thrive. In 2018, the reserve was placed on the IUCN Green List of Protected and Conserved Areas making it the first site in the region to receive this recognition.

The reserve is particularly known for its large population of Greater Flamingos – with as many as 4,000 living there during autumn and spring – but also hosts more than 250 species of birds, 37 plant species and a wide range of aquatic life. There are two self-guided walking trails (1.5 kms or 3 kms) for visitors to explore and a bird-watching hide to observe the flamingos.

Due to the current situation, our Al Watha Wetland Reserve will be closed to visitors until further notice

Life at times is strange. I share here below an article from a column I write in Gulf Today newspaper every week. Mostly, it focus on life experiences topping with a positive note or caution. Strangely, the subject of this article titled “Highway Mechanic” published exactly 10 years ago, seems to be very relevant even now. Due to the #covid19 lock down and increase in interaction between several of us with like minded thoughts and interests met together by chance here or at some other places in the virtual world, which would have never happened. With Back to Office now slowly progressing, not sure whether we get the same intensity or interest. Anyhow, the words in my article remain, will remain valid forever.

Being the only available mode of comfortable transportation during those times, we gave lot of trust and confidence to our old Ambassador Car. Whether it is Thirupathi, or Kanyakumari (almost 600 or 800 kms away from home), he is there and we know we will reach back safely. Another convenience is its capacity to carry volume as these trips are a joint family affair and at least we have 5 adults and 4 children in the party. Regularly kept in good condition our car seldom gave us any major trouble during those journeys. However, occasionally, we used to get a fan belt problem, or puncture or dynamo problem, and we used to rely the service of way-side or highway workshops. With full party, we reach somehow there and then mostly we get to see an ustad (expert) coming down or a chotta (student) mechanic running down and repairing the faults within the shortest possible time.

These stoppage times are also an opportunity for the members to explore the place and shop for the locally made specialties. In a few hours, the car is again ready for the journey and we continue towards our next destination.

Almost 100 out of 100 times, these garages and mechanics are never seen again as we never come back that way or stop there.

However, the service they render has been always excellent in quality to keep our (i.e unknown travelers) safety in mind. I am bringing back these old memories today just to reiterate the fact that my journey through these Short Take columns has been a similar one all through out.

I see the role of the passengers and the mechanics many times and some times I am lucky when I get to play the part of the mechanic to serve some unknown travelers and assist them to get going when stuck.

The journey is to be carried out by the person and the driving safety and well being and progress all depends up on how he/she look at it and carry out his / her role. If there is an opportunity to be of service to any one who genuinely requires it, I will be there. It’s an assurance.

I always believe, when we do things with Bhagavan’s Nama Smarana, Only and only good things – more good things will happen. To me, to you and to all of us.

Here is a Playlist created on SoundCloud adding Sai Bhajans by devotees from across the world:

Welcome to send me your diving bhajan singing sessions each day by whatsapp (00971552453151) and I will continue to add them to this link.

There are thousands and thousand of devotees, who derive bliss from listening to these bhajans and they look forward to it each time we upload.

This entry was posted in General, Talent Share and tagged #TalentShare, Sai Bhajan. 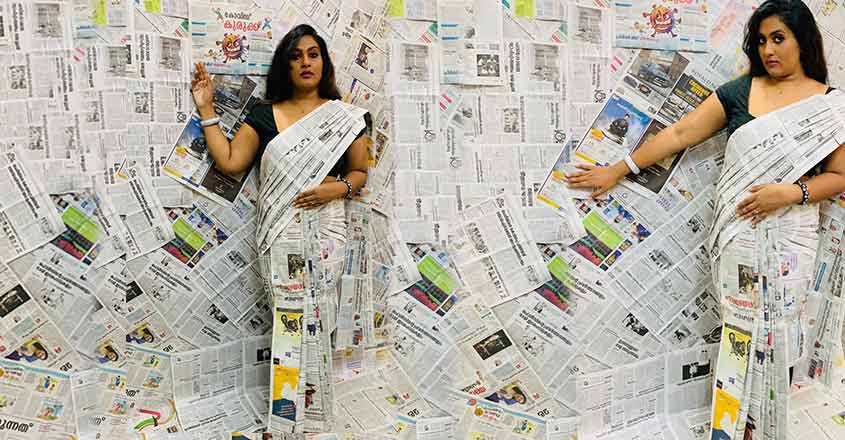 This is something really interesting. #COVID19 is bringing out creative talent in people in many different ways.

Here is what Ms. Merin Mariyam Mathews, an employee of Technopark have done.

She has designed and created a saree out of newspapers!.

Looking good and trend too. Not a bad effort for a full days creative work. Congratulations to your creative mind.

I always believe, when we do things with Bhagavan’s Nama Smarana, Only and only good things – more good things will happen. To me, to you and to all of us.

Here is a Playlist created on SoundCloud adding Sai Bhajans by devotees from across the world:

Welcome to send me your diving bhajan singing sessions each day by whatsapp (00971552453151) and I will continue to add them to this link.

There are thousands and thousand of devotees, who derive bliss from listening to these bhajans and they look forward to it each time we upload.

Stay at home and study Mathematics in simple ways.