Want to enjoy your #Weekend – #ExploreAbuDhabi the best way – Join #SafeCycling #InAbuDhabi with #TalentShare
In this photo: An Iconic building in Abu Dhabi. ADNOC Offshore (previously known as ADMA-OPCO) and ADNOC Gas (previously known as (ADGAS) headquarters in a 12-storey office tower. A glazed atrium is formed by the junction of two squares rotated in plan.
Together, we promote #RoadSafety #StartEarlyDriveCarfullyReachSafely #WearSeatBelts #AlertTodayAliveTomorrow #RoadSafety campaign by #ClicksandWrites #PassionatePhotographers and #TalentShare
For more details, contact @rameshmenonauh

The Special Olympics World Games 2019 is here around!. Yes, we are getting ready to welcome the athletes. They are special and always an important moment to take care of them with a smile. I am happy to be one of the volunteers for this mega event happening in Abu Dhabi. How can I stay away from it. Today, I collected the volunteer badge, T-Shirt and special instruction pack. The event is being organised meticulously. Systematic training is being given to all volunteers. Every minute detail is being taken care. I am sure, this event will be another success to showcase Abu Dhabi’s organisational skills. The year started with the ADNOC Abu Dhabi Marathon and one after another the Abu Dhabi calendar of events getting bigger and better.

By becoming a volunteer, I am happy to complete the following trainings:

Best wishes to all the athletes.

Models are plenty for cycling enthusiasts. But, too costly for quality cycles with options.

This entry was posted in Abu Dhabi - Sporting options, Daily Passionate Photography Thoughts, Photo Speaks, WysiWyc, WysiWyc - What you see is What you click.

Exploring Abu Dhabi – through Clicks and Writes – Winners Takes it all

Exploring Abu Dhabi – through Clicks and Writes – Winners Takes it all

Indian Sports and Cultural Centre Abu Dhabi (ISCC) encourage sporting activities amongst its members and public. Here is a display of trophies waiting for winners of an annual event. 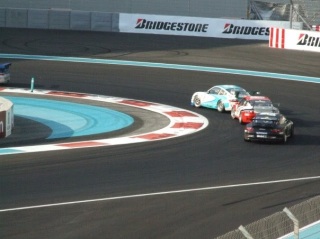 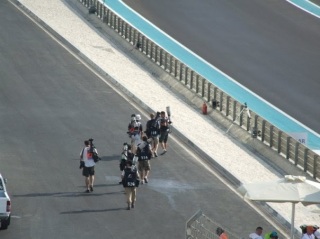 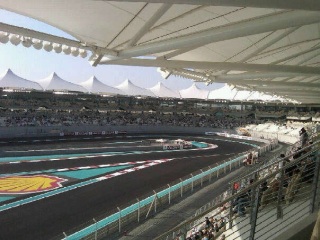 The focus now change to Yas Marina circuit and Abu Dhabi Grand Prix 2010.
The photos are from the Abu Dhabi Grand Prix 2009.
Yas Marina Circuit is owned by the Executive Affairs Authority of the government of Abu Dhabi and operated by Abu Dhabi Motorsports Management. It employs about 180 full-time staff, supported by up to 200 part-time workers and volunteers at peak times.
Right next door is the iconic Yas Hotel, a luxury marina, yacht club, six other hotels, the Yas Island golf links and the Ferrari World indoor theme park, set to open in late 2010. The international airport is close by and only 25 minutes away is the thriving city of Abu Dhabi, the capital of the UAE, largest of the seven Emirates and one of the fastest-growing tourism destinations in the world.
How to Get There
Yas Marina Circuit is easily accessible by road or air from the UAE and internationally. Situated on a natural island, visitors traveling by road from Abu Dhabi city can reach Yas Marina Circuit in around half an hour, while Dubai is just over an hour away. Access to the circuit is via a 12-lane highway which can be accessed from the Sheikh Maktoum (E10) highway from Abu Dhabi, or the Sheikh Zayed (E11) highway from Dubai. For overseas visitors, Abu Dhabi International Airport is just 15 minutes away by road.
Key facts and figures
The Formula 1™ track is 5.55 km long and can be split into two smaller tracks of 3.1 km and 2.4 km, which can operate simultaneously where desired.
Approximately 50,000 spectators can view the action on the circuit from the comfort of permanent, covered grandstands and air-conditioned VIP facilities. Yas Marina Circuit is the only motorsports venue in the world where all the grandstands are covered.
To know more about it, please visit Yas Marina circuit. online.

The Sheikh Zayed Stadium in Abu Dhabi built at a cost $22 million is one of the world’s finest cricket grounds. Opened in May 2004 and staged its first first-class match when Scotland played Kenya in the Intercontinental Cup during November 2004.
The ground is dominated by two large stands at either end, with the areas square of the wicket offering large grass banking for spectators to sit, although during the daylight hours that might be less than appealing as there is no shade. There is no pavilion as such, with the large changing rooms under one of the stands, and teams watch from inside air-conditioned glass rooms.
Regular club and international matches are played here.
Ramesh Menon
Post 7  Dt.  27.10.2010

One of the most scenic places in Abu Dhabi, Eastern Corniche, is a place to visit and walk during early morning and evening hours. It is located on the
Salam Street (Street No. 8).
The view towards the mangroves from the long walk way has been an integral part in the life of many Abu Dhabi residents for many years. However, like other infrastructure, this section is also getting transformed as part of the Salam Street development project and one wonders what will be the shape of it, once the project is completed.
It is a must to visit and walk around, especially if you are a photography enthusiast before it disappears.
Early morning during week-ends you may find many coming to this area for fishing. The area has useful spots for playing football and week-end parties.
Ramesh Menon
Post 3  21.10.2010