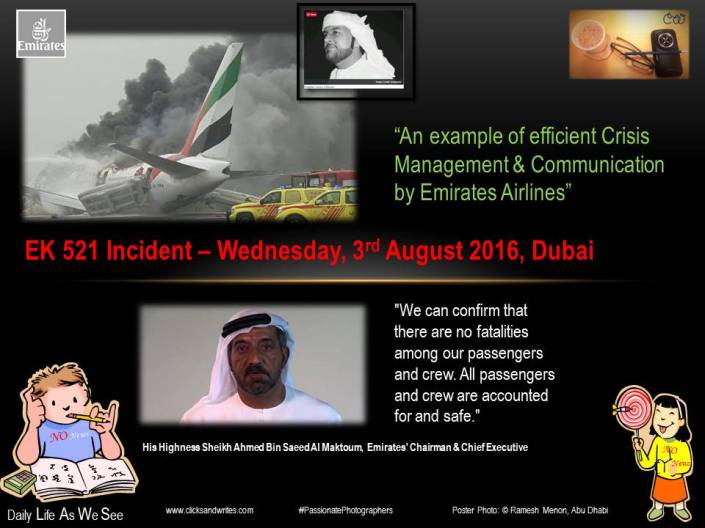 Emirates flight EK521 took off from Trivandrum in India while landing at Dubai International Airport on August 3, 2016 at about 12.45pm local time met with an emergency situation.

This is an age of swift and uninterrupted electronic communication. Dubai is an extremely busy city and its airport being open and visible from several points within the city.

An excellent example of Crisis Management

My sincere congratulations to Emirates Airline EK521 Captain and Crew for handling the Crisis exceedingly well. Highest level of praise also goes to the Dubai Airport Emergency Response Team, who handled the situation and made sure the incident was brought under control. As regards to Emirates Airline Crisis Management and Communication Team, this is an excellent example for all global Comms/Crisis Management Teams to observe and follow how effectively and efficiently a major crisis can be handled and communicated.

Everyone will agree and accept that this is not an easy task these days, when all are on social media and dissemination of information is just within the press of our fingers. On behalf of Emirates, the press conference and address by His Highness Sheikh Ahmed Bin Saeed Al Maktoum, Emirates’ Chairman & Chief Executive was very clear and matter of fact. The airline also came out with timely developing statements to avoid any rumors and feed stakeholders with right information.