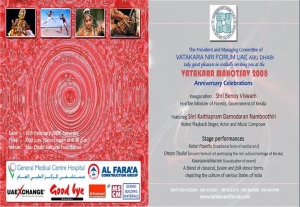 All roads in the capital city on 16th February lead to VATAKARA MAHOTSAV 2008 at Abu Dhabi Cultural Foundation!

It is a pleasure to announce that Vatakara NRI Forum UAE is organizing VATAKARA MAHOTSAV 2008 filled with a variety of stage performances and an enthralling musical concert in Abu Dhabi.

The event will feature Shri Kaithapram Damodaran Namboothiri, a widely acclaimed Playback Singer, Actor and Music Composer, who will unleash his powerful and soothing musical concert to keep the audience spell-bound at the Cultural Foundation.

Crowd puller theme based traditional forms of stage performances are lined up to enthrall the audience – and that will include a variety of entertaining classical, fusion and folk dance forms of various States of India, traditional form of martial arts (kalari payattu), visualization of poem (kaaviyavishkaaram) and an ancient form of art (ottan thullal) depicting the cultural heritage of Kerala.

You are cordially invited to grace the occasion of VATAKARA MAHOTSAV 2008 and enjoy the evening on 16th February 2008 Saturday, from 6:30 pm at the Abu Dhabi Cultural Foundation.

This entry was posted in Events Covered and Reviews, UAE.