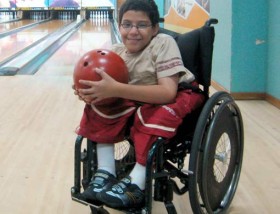 Dubai: Abdullah is a 10-year-old boy born with spina bifida – a neurospinal disease that causes paralysis from waist down.

He has been using a wheelchair for years. Other than his physical disadvantage Abdullah has no other health problems, and is mentally and socially capable and sound.

Yet the ambitious child faces a tremendous challenge daily since society does not cater to the basic needs of people with special needs. Abdullah’s parents worry every year about his schooling.

Last year he was forced to leave a school because of his physical disability and missed the first three weeks of the academic year. Most schools in the UAE do not have ramps or are inaccessible for people with special needs.

Fatima, his sister, is frustrated by the education system and believes there should be a department or authority willing to cater and support children with special needs.

“The Ministry of Education couldn’t do anything about the previous school or help direct me to a school accessible for people using wheelchairs,” she said.

In his previous school, Abdullah was enrolled in grade 4 with the hope of progressing to grade 5 in the same establishment despite the fact it is on the second floor.

Now Abdullah is in a different private school after visiting 15 schools and contacting over 25 schools to find one that is willing to enrol him and has the necessary facilities. Although he likes his new school and is well-adjusted, he still faces the same challenge of having the upper level classes on the second floor along with the laboratories.

This entry was posted in Education +.