‘Fighting it out has made me stronger’ 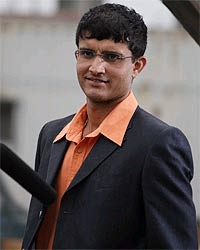 ‘Fighting it out has made me stronger’
TNN / Sumit Mukherjee

If things go according to the script, Sourav Ganguly will step on the Melbourne Cricket Ground turf to play his 100th Test on Wednesday. TOI caught up with the ‘Bengal Tiger’ in Melbourne for a heart-to-heart chat.

Looking back on your career, are you happy with what you have achieved?

I have enjoyed some very good times and also gone through tough periods. What’s important is that I have been lucky to be a part of Indian cricket during one of its most successful phases. It’s easily the high point of my career.

Have you seen many changes in Indian cricket during your time?

A lot of things have changed since I made my Test debut in 1996, especially in terms of training and approach to the game. I have no doubt in my mind that it’s because of these changes that our performances overseas have improved.

You have been a part of a core group of exceptionally talented players. Did you enjoy the ride?

It has been a privilege to play alongside people like Anil Kumble, Sachin Tendulkar, Rahul Dravid and VVS Laxman, for they are special players. Together we have seen Indian cricket progress. The period between 2000 till the end of the Pakistan series in 2004 was easily one of the most successful periods in contemporary Indian cricket. It was also during this period that we were as successful overseas as we were at home.

Of the two comebacks you have made in your remarkable career, which was more difficult, the one in 1996 or 2006?

Returning to the fold in South Africa last year was the biggest challenge of my career. In 1992 when I was dropped after just one ODI on the tour of Australia, I was still very young. After returning, I was happy playing in the Ranji Trophy. At 20, age was on my side. However, when I got left out in 2005 it was tough. When I came back in 2006, I needed to find out for myself that I was still good enough to keep performing at the top level.

What did life in the wilderness teach you?

I realised that there is an entirely different life beyond cricket. It helped to settle my mind. It was a tough phase, but fighting it out helped me to emerge stronger.

Do you have anything left to prove?

Contrary to the popular belief, I have never tried to prove or disprove anything. Every time I enter a cricket ground I just want to reassure myself that I belong at this level. Even today, I need to constantly reassure myself that I am mentally, physically and technically strong to meet the challenges of international cricket.

In the days of image makeovers, you seem to have reconstructed your batting technique…

Nothing major. I just made a few adjustments to my stance and grip. Now that I am no longer the captain, my mind is a lot free and I have more time on my hands. I use it to keep working on my game.

How big a deal is it to be Indian captain?

It’s a great honour and a huge responsibility. I feel every captain has a shelf life. No one can do the job indefinitely because it takes a lot out of you. In India, a captain has to deal with so many things that sometimes he has no time to think about his game.

How do you assess your own captaincy?

I have always felt that wickets overseas are much better than in India. So, to win abroad, we needed a few good seamers to support our two world-class spinners. Of course, we also needed runs on the board. It was, therefore important to make the players believe in their own ability. It was also important to pick players who we thought would do well overseas and persist with them. That helped us as these players played freely and delivered.

So you are happy to be out of the captaincy equation?

Let’s put it this way, the pressure on a captain has increased manifold since I first took of the reins of the team. Rahul and Anil must have found that out by now.

As someone who played a small role in showing the world that India is no longer a pushover while playing overseas.

You must be looking forward to playing your 100th Test match. How will it be different?

I don’t think it will feel any different, but of course, it will be hugely satisfying. I am preparing for it just as I normally do for any other match. It will be an important landmark in my career and I will strive to make the occasion more memorable.

How has cricket shaped your persona?

Had I not played this wonderful sport, I wouldn’t have been able to experience or know half the things in the world. Not only has cricket taken me all over the world, it has also taught me how to handle pressure and criticism. I also would not have been able to savour the sweetness of success. It’s been a huge learning process.

Have you visualised your life after cricket?

I have travelled a lot. Probably I will play for some more time, which will include some more travelling as well. I will have to wait and see how I feel mentally by the time I finish. I want to stay at home for some time, with my daughter.

This entry was posted in Information - Positive Thinking, Sports +.