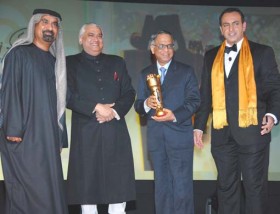 Dubai: A number of businessmen were honoured at the first Asian Business Awards Middle East (ABA ME) held at the Emirates Palace Hotel in Abu Dhabi on Saturday evening.

The ABA ME has been instituted to recognise and award business excellence within the Asian community and nurture economic relations between Middle East and the sub-continent.

The public had a clear and definite participatory role in the ABA ME awards process. The debut award year had 200,000 registrations. While the grand jury finalised the three nominees in each of the six categories, the public were once again imperative in the choice of winners.

Global Asian of the Year: Lakshmi N. Mittal, president of the board of directors and chief executive officer, Arcelor Mittal.

This entry was posted in TQM, UAE.