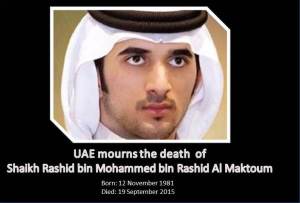 UAE President mourns the death of Shaikh Rashid bin Mohammed bin Rashid Al Maktoum and expresses his sincere condolences and sympathy to Shaikh Mohammed and Maktoum family.  Shaikh Rashid Bin Mohammad Bin Rashid Al Maktoum, the eldest son of His Highness Shaikh Mohammed bin Rashid Al Maktoum, Vice-President and Prime Minister of the UAE and Ruler of Dubai, died of heart attack on Saturday. He was 34. Dubai Media Office has tweeted that funeral prayers will be held after Maghrib Prayers at Zabeel Mosque in Dubai. Burial will take place at the cemetery in Umm Hurair, Dubai. The government has declared three days of mourning and flags at half mast.

To know more about him: https://en.wikipedia.org/wiki/Rashid_bin_Mohammed_Al_Maktoum

This entry was posted in Information - News and tagged News.