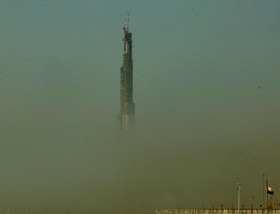 Al Ain: A significant fall in night temperature is expected on Tuesday in the country due to strong shamal winds, the met office has forecast.

The wind will begin blowing in the western areas by this afternoon kicking up dust.

“It will gradually reach rest of the areas [of the UAE] by evening,” according to the forecaster of the National Centre for Meteorology and Seismology (NCMS).

The strong winds would make the sea very rough with eight to 11 feet of waves offshore. Fishermen and small boat riders have been advised to stay away from the sea.

A Met official said day time conditions would, however, remain fair and rather hot in general, but would get cold by night.
Thick fog blanketed on Monday some coastal areas such as Dubai, Sharjah and Ajman. Reduced visibility forced drivers to be extra careful in their early morning drives.