Abu Dhabi: A black point system for traffic offences is to be implemented across all the emirates starting March 1, senior Ministry of Interior officials said on Sunday.

On March 1, the new Unified Federal Traffic Law comes into effect putting in place hefty penalties for serious traffic offences as well as black points against the licence of the driver.

“Earlier errant drivers could get away with paying comparatively low fines, but from now on the rules are getting tough”, said Lieutenant General Saif Al Shafa’ar, Undersecretary of the Ministry of Interior, at a press conference, announcing amendments made to the Federal Traffic Law. Fourteen amendments have been made to the traffic law.

“The lives of 1,056 people were lost in 2007 alone all over the country in traffic accidents. This number is what forced the ministry to come up with the changes,” he said.

The strategy of the ministry is to cut down traffic deaths as much as possible by effective changes in the traffic law clubbed with stringent implementation techniques, Al Shafa’ar said, adding that the new law will save lives and create a safe environment for all road users.

The maximum number of black points a motorist can incur in a year is 24 at which point his licence is suspended. Once a person collects 24 black points, the licence will be suspended for three months. If a motorist collects 24 points for the second time, the license will be suspended for six months. If it happens for the third time, the licence will be taken away for one year and will not be returned until the driver passes a training course from an institute authorised by the traffic department.”

Senior officials said that if a motorist has collected, for example, 20 black points and feels that his licence could soon be taken away if he accumulates 24 points, he can take a training course at an authorised driving institute. Police will then remove 8 points. This option can be utilised only once a year.

If a driver is below 21 years and collects 24 black points, then the licence will be impounded for six months. It will be returned after the driver passes a driving course. Also, if a driver gets 24 black points within six months of issuance of his licence the licence will be cancelled and the person cannot apply for a test only after one year following the date of cancellation.

If the driver of a heavy vehicle has caused an accident which results in the flipping over of vehicles, or he has jumped a red light or overtaken in places not allowed, the vehicle will be impounded for one month and licence will be suspended for one year.

The ministry has already started an awareness campaign to reach out to all sections of society to familiarise them with the new law. Arabic, English, Urdu and Malayalam brochures will be distributed to the public as part of the campaign.

As part of the new law some vehicles have been exempt from registration and licensing fees such as vehicles belonging to those with special needs.

Similarly, the points incurred in October 2008 will be cancelled in the same month the following year. 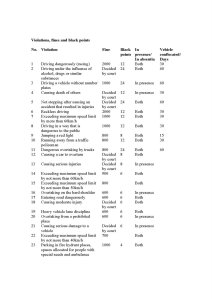 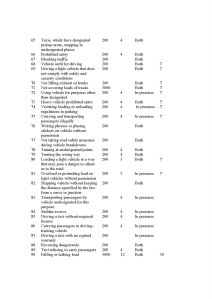 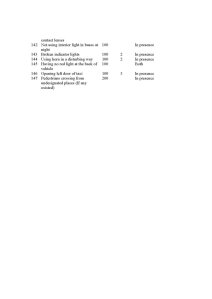 This entry was posted in TQM, UAE.