Incessant rains throw life out of gear in UAE 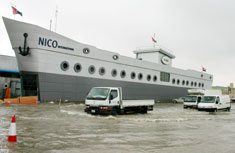 DUBAI—A record rainfall for a January day in Dubai yesterday threw normal life out of gear in the emirate. While the rain led to widespread flooding across areas of Dubai, Sharjah and Ajman, partly submerging cars, disrupting traffic and forcing schools to close yesterday, five people were reported killed and many injured in separate road accidents in the emirates.

In all, more than 800 road accidents were reported in Dubai, Sharjah and Abu Dhabi yesterday morning.

Airports, however, were functioning normally, with minor delays, the maximum of about an hour for some flights. But the traffic jams and waterlogged roads meant many passengers missed their flights and some were even forced to walk to the airport to catch the flights.

Fujairah reported landslides and rock falls although the impact on streets was limited. The emirate also experienced power outages for short periods.

For the third consecutive day, particularly for Dubai residents, life was thrown off gears. Residents of Sharjah, Ajman and other emirates braced through the incessant rainfall and waterlogged streets in the hope of safe shelters of their homes.

More than 105mm of rainfall -20mm higher than the January record- was recorded in Dubai from Monday evening to 6pm yesterday, according to the duty forecasters at the Dubai International Airport meteorological office. The average rainfall for January in Dubai is 17mm.

Sharjah, with 100mm rainfall, was one of the worst affected, where residents alleged weak rain contingency plans. Many woke up to find their cars submerged in rainwater.

Rainwater brought the Ittihad and Emirates Road virtually to a halt, with the traffic across Sharjah and Dubai going into a spin for the third day straight.

Hundreds of municipality workers across the UAE worked non-stop through the day pumping water out of the roads. The Dubai Municipality (DM) earmarked Rashidiya, Jumeirah, Umm Suqeim, Abu Hail and parts of Shaikh Zayed Road as the worst affected areas in the city.

Senior officials of DM said they would be extending their rainwater drainage system within a year in coordination with the Roads and Transport Authority (RTA).

While a limited number of houses, mainly in Ras Al Khaimah, were affected by the floods, labour camps in low lying areas were badly impacted.

A construction worker at the Sonapur labour camp in Jebel Ali said the camp was flooded, with residents desperately trying to patch up leaking roofs with plastic and deal with the flowing sewage as bathrooms backed up. “There is water all around. The conditions of the bathrooms are particularly messy with all the sewage water coming out of it,” he said.

Workers at other labour camps across Dubai too complained of similar experiences.

Many students were unable to reach their schools in the morning, causing high number of absentees, reportedly forcing Dubai and Sharjah schools and universities to close and send students home.

Meanwhile, some residents enjoyed the rain yesterday with Dubai and Sharjah students celebrating a day off and farmers grateful for the much-needed water. Fujairah dams recorded good water levels, including 1.5m at Al Bosira Dam and 2m at Al Rakbi Dam. This signalled relief for farmers who were earlier complaining about the dry month of December.

In Al Ain, mercury dipped to 14 degree Celsius, as the city experienced light to heavy showers in the past 36 hours since Sunday morning.

Authorities have issued warning to residents against venturing out to the sea because of rough swells. Residents and tourists have been advised not to travel to mountainous areas, valleys or wadis because of the danger of flash flooding.