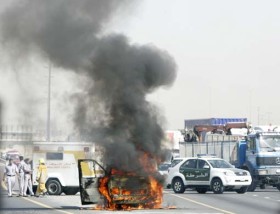 Dubai: Five people have been killed in separate traffic incidents in 24 hours, with three burning to death in a horrific crash yesterday.

Three people, believed to be two Colombians and an Omani, burnt to death in a collision on the Dubai-Al Ain road. A driver, believed to be Omani, was speeding in his four-wheel drive when he lost control and rammed into a car (carrying the other victims) which was parked on the shoulder ahead of the sixth interchange on the Dubai-Al Ain road. The accident took place at about 11am.

“The strong impact tossed the vehicles 98.1 metres before the three victims were burnt completely. The suspected Omani driver seems to have been fatigued, sleepy or was busy with something inside his vehicle when he lost control and rammed the other car. Investigations are ongoing to identify the victims and the causes,” Salah Bu Farousha, Head of the Traffic Public Prosecution, told Gulf News two hours after the accident.

The impact pushed the vehicles from the right-hand lane into the hard shoulder of the road before they were burnt completely, he explained.

Preliminary investigations showed that the driver of the four-wheel drive wasn’t paying attention as he did not try to brake but rammed into the other vehicle, Bu Farousha revealed to Gulf News. The Head of Traffic Public Prosecution called on motorists to refrain from parking their cars in a dangerous manner on shoulders of roads, especially on highways, without using warning lights.

Dubai: Third fatal accident in about 10 days
This is the third major accident involving more than three casualties in about 10 days on Dubai roads. In the first accident, a minibus swerved on Emirates Road and seven workers from Thailand who had just arrived were killed on the spot.

The second accident happened in a Karama tunnel when a speeding car hit the kerb and overturned.

The car exploded in flames and burnt within 90 seconds, killing five men in it.