Known as the Garden City, Al Ain was once a vital oasis on the caravan route to Oman. Situated just 148 km east of the capital, Al Ain boasts several historical forts and archaeological sites. Fascinating insights into its origins can be found at the Al Ain Museum and the Natural History Museum at the University of Al Ain, both of which feature displays on life before the discovery of oil in the region.

The Hili Archaeological Garden has remnants of a Bronze Age settlement dating back to 2500 – 2000 BC. This site is the source of some of the richest archaeological finds in the area, several of which are believed to be more than 4,000 years old. The Jahili Fort, once home to the late ruler Sheikh Zayed bin Sultan Al Nahyan, is notable for its impressive main turret, which has four levels.

Al Ain is the most fertile region in the country, and its oasis supports a host of palm plantations and working farms. The city’s many parks are all beautifully kept and well worth a visit. Featuring play areas, benches under shady trees, meandering walkways and elaborate fountains, they offer tranquil hideaways for visitors and residents alike.

The Al Ain Zoo and Aquarium, spread over 400 hectares, is one of the largest in the Gulf region. It is home to a wide variety of species, both common and rare, and runs an ongoing breeding programme for endangered animals.

The city’s camel market is well known throughout the country and is the last of its kind. It provides the opportunity to see and hear traders discussing prices and listing the merits of their prized camels. The nearby animal souk is a similar experience, although it specialises in the sale of sheep, goats and other livestock.

Al Ain’s Old Prison affords the best views of the city and its surrounding oasis. It is a lone square turret in the centre of a gravel courtyard, surrounded by high walls. At night this historical building is illuminated, and offers a beautiful view when seen from the nearby camel market.

Overlooking the city is the majestic Jebel Hafeet, the highest mountain in the country. A road leads to the summit offering spectacular views in all directions. At its base are Ain Al Faydah natural spring and the Green Mubazzarah tourism resort. 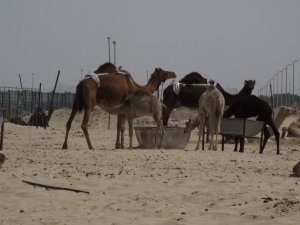 This entry was posted in Photo Speaks, UAE.