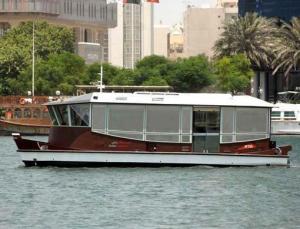 “There is a massive concentration of government offices, banks, shopping areas, and tourist sites along Dubai Creek and the water bus is the answer to avoiding traffic congestion in the area,” Eisa Abdul Rahman Al Dossari, Chief Executive Officer of the Marine Agency at the Dubai Roads and Transport Authority (RTA) told Gulf News at the launch of the Dubai Creek water bus routes.

“People can beat traffic congestion, save time, money and hassle in finding parking by simply using the water bus to commute in the area,” he added.

The new water transport is part of an integrated public transport plan to curb traffic congestion. It will serve the congested central business districts of Deira and Bur Dubai.

All five routes of the luxury water bus service are now operational as part of the first phase of a strategic plan for marine transport.

“By introducing air-conditioned water buses, we are targeting new types of commuters and encouraging them to park their cars and use water transport to commute along the creek,” said Al Dossari.

He said the water buses were not in competition with the abra service (traditional boats that traverse the Creek) but would complement it.

Around 20 million passengers use the abra service every year.

“We hope at least 2 million people will use the water bus every year,” he added.

Regarding the price difference between the abra fare (Dh1) and the new water bus fare (Dh4) he said passengers would be travelling in luxury on the water bus as it has proper seating, air-conditioning and facilities for the disabled.

The RTA has also introduced a smart card for the water bus service. Those, who use Dh40 worth will also get a 10 per cent discount. Passengers can also purchase tickets from the machine installed at abra stations.

Al Dossari said the water bus service is part of the first phase of the marine public transport project launched by the RTA’ s Marine Agency which has earmarked Dh1.5 billion to have integrated water transport services to implement its marine transport strategic plan 2020. Initially, eight out of a total of 10 water buses with the capacity to take 36 passengers each will be used while two water buses will be reserved for tourists. The operation will be seven days a week for 17 hours every day, from 6am to 11pm.

Abras: No new licences
With the launch of the service the RTA has stopped issuing licences for abras to cross the creek.

“No new abra licences will be issued because we understand the present 149 are more than enough to handle the current demands of passenger traffic,” Eisa Abdul Rahman Al Dossari, CEO, told Gulf News.