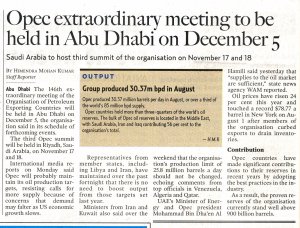 Abu Dhabi: The 146th extraordinary meeting of the Organisation of Petroleum Exporting Countries will be held in Abu Dhabi on December 5, the organisation said in its schedule of forthcoming events.

The third Opec summit will be held in Riyadh, Saudi Arabia, on November 17 and 18.

International media reports on Monday said Opec will probably maintain its oil production targets, resisting calls for more supply because of concerns that demand may falter as US economic growth slows.

Representatives from member states, including Libya and Iran, have maintained over the past fortnight that there is no need to boost output from those targets set last year.

Ministers from Iran and Kuwait also said over the weekend that the organisation’s production limit of 25.8 million barrels a day should not be changed, echoing comments from top officials in Venezuela, Algeria and Qatar.

Oil prices have risen 24 per cent this year and touched a record $78.77 a barrel in New York on August 1 after members of the organisation curbed exports to drain inventories.

Opec countries have made significant contributions to their reserves in recent years by adopting the best practices in the industry.

As a result, the proven reserves of the organisation currently stand well above 900 billion barrels.

Opec produced 30.37 million barrels per day in August, or over a third of the world’s 85 million bpd supply.

Opec countries hold more than three-quarters of the world’s oil reserves. The bulk of Opec oil reserves is located in the Middle East, with Saudi Arabia, Iran and Iraq contributing 56 per cent to the organisation’s total.

This entry was posted in Information - Oil Gas Future Energy.