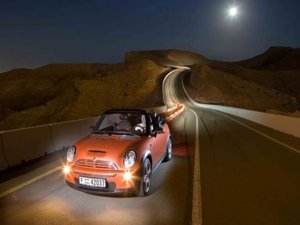 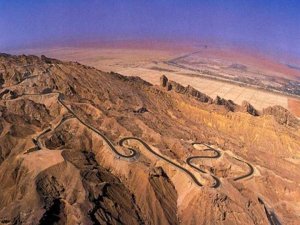 Just have a look what they have created in a desert…

The Jebel Hafeet Mountain Road in the United Arab Emirates (UAE) is the greatest driving road in the world. Stretching for 7.3 miles and climbing nearly 4,000 feet, it boasts 60 corners and a surface so smooth that it would flatter a racetrack. It could easily be described as the eighth wonder of the world, but almost nothing is known about its creation.

The road is cut into the Jebel Hafeet Mountain , the highest peak in the United Arab Emirates , the oil-rich Persian Gulf state. The mountain spans the border with Oman and lies about 90 minutes’ drive southeast of the thriving city of Dubai . It looks down upon a dusty, desert landscape that belies a nation of astonishing wealth.

Jebel Hafeet (Arabic: جبل حفيت) (variously translated Jabal, Jabel and Jebal) is a mountain primarily in the United Arab Emirates on the outskirts of Al Ain. The mountain actually straddles part of the border with Oman. The mountain rises 1240 meters and offers an impressive view over the city, with what has been described as “the greatest driving road in the world” extending to the summit. Jebel Hafeet was a well-known landmark through out the area’s history and is a contemporary tourist attraction. An extensive natural cave system winds through Jebel Hafeet.

It is often incorrectly labelled U.A.E’s highest mountain (as it is certainly the most well-known); this honor actually belongs to Jabal Yibir.

The Jebel Hafeet Mountain Road extends for 7.3 mi (11.7 km) up the mountain, rising 4000 ft (1219 m). With 21 corners and three lanes (two climbing and one descending), the immaculate road was called the greatest driving road in the world by Edmunds.com. The road scales the mountain and ends at a parking lot with only a hotel and a palace belonging to the country’s rulers.

Jebel Hafeet Road is the challenge for cyclists who frequently come over to train. The Jebel Hafeet Mercure Challenge is a yearly road cycling competition taking place somewhere in January. National & international riders take part in climbing the 8% average ascent of the mighty mountain.

This entry was posted in Photo Speaks, UAE.