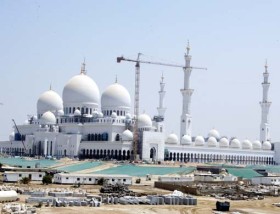 Abu Dhabi: More than 1,500 workers, supervisors, designers and engineers are working feverishly to put the final touches on Shaikh Zayed Mosque, which can accommodate about 40,000 worshippers.

The mosque is scheduled to open at the end of Ramadan for Eid prayers and its main prayer hall can accommodate about 5,000 worshippers, said project manager Khowla Salem Al Sulaimani.

The striking domes of the mosque are reportedly the largest ever built on any mosque.

“Two international Islamic organisations have confirmed it is the third largest in the world,” said Khowla, but notes that its main striking features are its domes, the biggest among any mosque in the world.

The General Secretariat Organisation of Islamic Countries (OIC) based in Saudi Arabia, and the Research Centre for Islamic History, Art and Culture in Turkey have confirmed the 22,412 square metre mosque to be the third-largest in the world.

The carpet was woven by about 1,200 Iranian women. The carpet which costs Dh30 million was delivered to Abu Dhabi last week.

The 16.5 metre chandelier was imported from Germany. The seven chandeliers in the mosque cost about Dh30 million.

The main dome which is 87 metres high with a diameter of 32.8 metres, is the largest in the world. While the other 81 domes are of traditional Moroccan design.

The main door of the mosque is made completely of glass and is 12.2 metres high. The 7 metres wide door weighs about 2.2 tonnes and has beautiful floral designs.

The prayer halls are decorated with Italian white marble and are inlaid with floral designs. Various designs are used for different parts of the mosque.

The courtyard is decorated with white marble from Greece, while its 1,048 columns are being decorated by workers from India, points out Khowla, who is proud to be working on a world famous project.

The outside walls of the Shaikh Zayed Mosque are of traditional Turkish design. Worshippers entering the mosque will get a fantastic view of the entire structure, reflected in the waters surrounding it.

The four minarets of the Shaikh Zayed Mosque reach a towering height of 107 metres and can be seen from far off.

“The whole structure is on an elevated position as the foundation has been laid 9.5 metres above ground level,” said the project manager.

Municipal Affairs Department of the Abu Dhabi Municipality is supervising the finishing touches on the Shaikh Zayed Mosque, one of the ten largest mosques in the world.

Director of the Shaikh Zayed mosque project Khowla Al Sulaimani said that the main prayer hall of the mosque is expected to be opened during the final days of the month of Ramadan. The carpet to be spread in the prayer hall arrived yesterday from Iran.

Different colours
The 5,000 square metre carpet is the largest of its kind in the world and is handmade with 35 tonnes of wool and cotton.
Public relations director at the Municipal Affairs Department Mubarak Saif Al Mazroui said that the Shaikh Zayed Mosque is a magnificent addition to Islamic architectural splendour, and will become a landmark in the UAE and the region as a whole.